I think I have found the perfect food, that’s all.

The sky is moody and unsure today, I am dressed in my husband’s grimy highschool coveralls and painting in the kitchen. Painting kitchen shelves, to be exact. We inherited three  wooden box shelves from Alex’s mother that have been put to very good use over the past couple of months, and now that the weather is fair, we have emptied them and I am letting loose my frustrated interior decorator – paint flies. So exciting, but I’ve worn myself out and it’s time for lunch.

I have been ever so slightly obsessing about my new favorite food, Caprese (chicken caprese, caprese salad, caprese panini.. anything caprese, really.) and finally have all the ingredients to make it – at home – oh my. Good things coming!

Ripe tomatoes (we paid a little extra and got locally grown hydroponic ones… ooo lala… absolutely worth it.)

Buffalo Mozzarella (Can I get a ‘yum’ from the crowd? Oh. My. WORD. This makes all other store bought mozzarella taste a little lame with its soft milky-ness…)

Basil (this I cheated a little bit and bought one of those tubes of fresh herbs. Who’s ever heard of that? Herbs, blended with a little oil and kept in a tube – it’s a little futuristic, but until our basil grows a little more it will have to do.)

a dribble of balsamic vinegar

I’ll be right back.

Ok, I’m back. It was superb, but next time I am going to skip the bread and just eat the mozzarella with tomato and basil by itself – I think it will be much improved. Here’s what I did: Placed a smear of olive oil in my little frying pan (lacking a panini maker, a frying pan *is* our only option) then laid down a slice of bread. On top of that I layered some slices of mozzarella (I ate a couple too, don’t tell…), some of the fascinating basil paste, slices of tomato, then the other slice of bread. Grilled on both sides for about 3 minutes (which was far too much!! I, of course, burned my sandwich – but we won’t talk about that now…) and then served cut in half with a drizzle of vinegar on top.

I took some pictures while I was out there..

The mess that is my kitchen…. 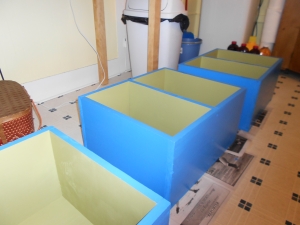 The shelves, which are painted, “Holy-Cow-That’s-Tarp-Blue” and “I-LOVE-GUACAMOLE!!-Green”  Loverly, ain’t they? *That’ll* brighten things up a bit! 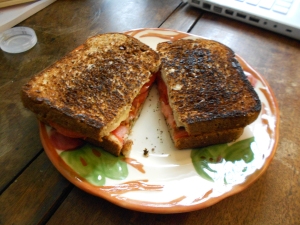 My burned sandwich. Uglier than all its peers, it still tasted delicious to the one who charred it. Next time, definitely no bread…

I made spaghetti for my love on Wednesday, but unlike the other batches of garlicky red sauce I have cooked up previously, this one was made in preparation, in expectation, as an offensive maneuver against the day ahead.

I was going to have an MRI, my first ever, and after hours of trying to distract myself by counting dust floaties in the air and coming up with witty things that “MRI” could stand for (as in, My Ridiculous Insurance. Or, Many Radical Insects- yes, I was desperate) I decided to work on dinner.

They told us during my first appointment with the shoulder specialist that I needed an MRI, and soon, before they could diagnose or treat my bum arm. When we were scheduling said MRI, they asked if I was claustrophobic. I immediately felt pressed in and breathless.

“Like, how claustrophobic would I have to be to have it be a problem?”

I *am* claustrophobic. I don’t sleep with the covers over my head and I can’t stand the thought of babies being womb-bound for nine WHOLE months. I don’t usually even sleep with socks on my feet because my toes begin to clamor for freedom. And yet, I’m not claustrophobic enough to refuse to ride in elevators or small cars. Just where was this MRI going to fall on the ‘claustrophobia’ scale?

“Ok.” The receptionist began, understandingly, “We’re just going to put in for a prescription for one Valium for you to take beforehand so that you are able to relax. Most people just sleep through them, you’ll be fine.”

“You will need a driver, I assume you’ll bring her?” She looked at my husband. He eagerly signed up as designated driver and we were off.

Ten days later I was standing in my kitchen, thinking about dinner. I knew I was probably going to be a little tired after the day’s events, and might even still be woozy from the Valium and didn’t want to have to worry about food, so I decided to make spaghetti in the crockpot. It could cook all day and if I was really bad off, all Alex would need to do was boil some pasta and we’d have a simple, but decent dinner to sit down to. It’s a meal even someone tripped out on Valium could work out.

The oil goes into a hot frying pan and then is joined by the diced onions and minced garlic. This is left to cook for some time until the savory bits have melted and browned. If you are going to cook this in a crock pot, that should be ready and waiting to receive it’s due. If you’re going to slow cook it on the stove, you’ll need a decent-sized pot. The onions and garlic should be scooped out of the frying pan and put into their long-cooking home.  Now the ground beef and sausage is going to be fried with the water. The water is going to help the meat cook with a little less fat than would be otherwise be needed. If things start to stick, feel free to add a couple more tablespoons of water or so. You can either let it cook off in steam, or use it and try to strain some of the fat that will come from the cooked meat later on. You’re the Cook- it’s up to You. Make sure to break the meat up into little bite-sized pieces. Yum. I love spaghetti sauce with sausage.

I opened the cans of sauce and dumped them in with the waiting onions and garlic, then added the herbs. When the meat is well cooked, it’s goes into the pot as well. Heat is applied- for quite some time. Viola. Very simple, but the end result is delicious.

I went to have the MRI, I took the little yellow pill right before going in to have dye injected into my shoulder joint (no, it didn’t kick in in time and I had to suffer through the dye totally sane and conscious. Bummer.) and then was whisked away to their loud, plastic tube to be MRI-d. By that time, the medicine had *definitely* started to work and I think they could have tied me up and thrown me off a bridge and I would have laughed and had a merry old time. But they propped me up and I spent 45 minutes listening to classical music and yes, sleeping. By the time I was leaving the hospital with my beloved designated driver, I could barely walk. I guess those sorts of drugs work rather hard on people who aren’t used to them. I am not used to them and spent the next hour or two rushing between hysterics and depression. No, I don’t remember most of it. Yes, I totally freaked my husband out. No, I am not going to start taking Valium on a regular basis. Yes, he was able to get some of the insanity on video with my iPod. I guess I became quite emotional about french fries and Dairy Queen and a random stranger who was walking in the rain before insisting that all the bees had died. Oh my.

The good news is, I was able to sleep it off and woke up wicked hung over, but back to myself. I was able to weakly rejoice over having survived the dreadful injections and the MRI. And, the spaghetti sauce was incredible.

Alex told me that during my drug-induced frenzy, I kept asking him if he wanted spaghetti with his spaghetti. Yeah. We’ll just let that one go.

“You can’t have everything….

...but when it is August, you can have it August, and abundantly so." Barbara Ras

There is no spectacle more appealing than that of that a woman in the act of cooking for someone she loves. – Thomas Wolfe